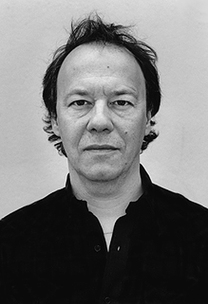 Stage director and producer, he is the general manager of T&M-Paris since 1997, after working as assistant manager of Atem with Georges Aperghis (1992-1997). He has commissioned new operas and music theater pieces (Aperghis, Bianchi, Dillon, Donatoni, Dusapin, Filidei, Goebbels, Pesson, Rivas, Sarhan…) and made possible french premieres (Dusapin, Goebbels, Mitterer, Sciarrino…).

In 2020-21, he works on the creation of Dmitri Kourliandski opera Eurydice, based on a poem by Nastya Rodionova, and the one by Sebastian Rivas Rayon N, of which he wrote the original libretto.

​He has written numerous articles on contemporary music and has edited a collective work on Georges Aperghis (Le corps musical, Editions Actes Sud, 1990). In 2009, he has leaded the "Atelier Opéra en Création" of the Festival d’Aix-en-Provence, in 2012 he is guest professor with composer Giorgio Battistelli at the Accademia Chigiana in Siena, in 2017 he is a tutor of Biennale College program at the Venice Biennale, and in 2018, he is guest professor at Winter School in Buenos Aires. In 2019, he has leaded a workshop devoted to Conversations by Georges Aperghis at Ilkhom Theater-Mark Weil in Tashkent.